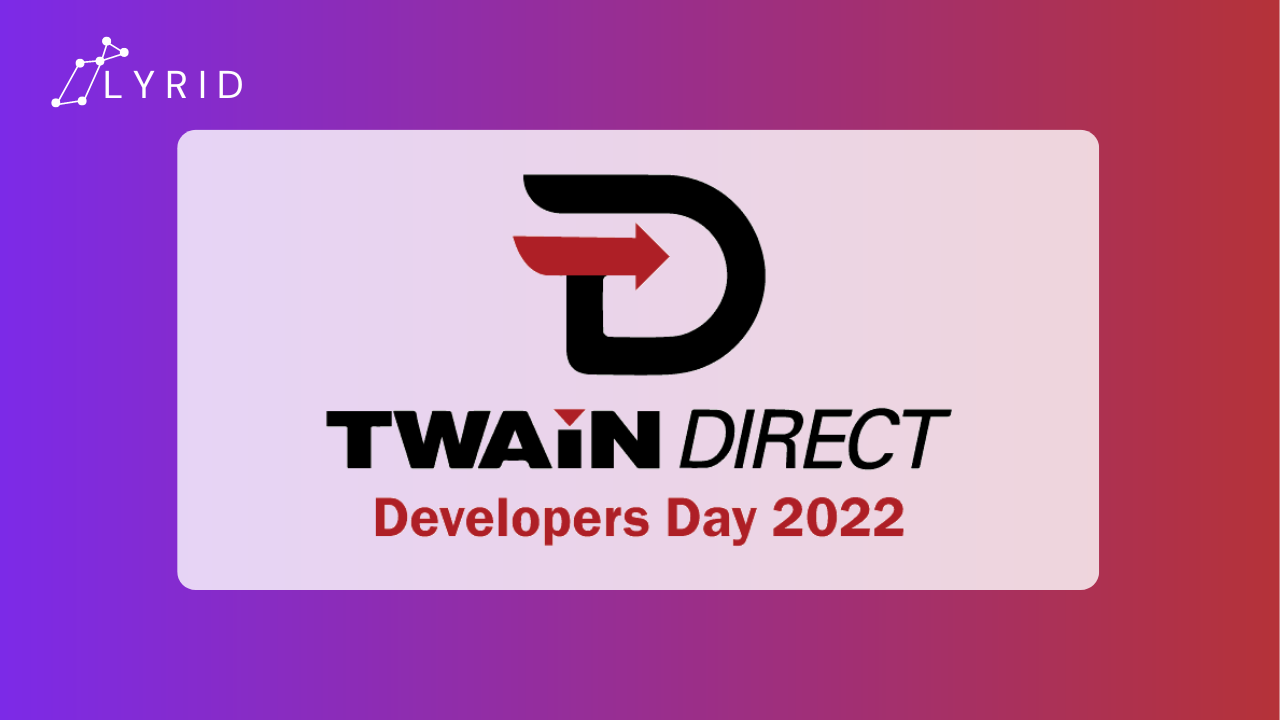 The masterminds behind this event, the TWAIN Working Group, is a non-profit organization aimed at providing a universal standard for linking software applications with image acquisition devices- think about a document scanner or a camera and how they communicate with certain software. Developers Day is TWG’s answer to the growing opportunity to digitize images with an easy, secure and effective solution!

But what is so innovative about Developers Day? Is it the expert technical support? The free TWAIN solutions and Lyrid sandbox? Or even the opportunity to connect and create with other developers in the space?

It’s all of the above.

Have you ever been to a hackathon?

Picture a room full of developers, the sound of fingers clicking aggressively on keyboards drowns out all noise, the scent of Red Bulls fills the air. Hackathons are tense events that push developers to the extreme, creating teams of participants to build projects and solutions within a certain time frame (usually 2-3 days) and using certain types of technologies.

TWAIN Direct Developers Day is like a hackathon, but less sleep-deprived and with less of a tense atmosphere. Instead of Spotify replica projects and simple calculators, the developers at Developers Day are looking to build the next Google or Netflix using TWAIN Direct.

The event spans for 1 day, hosts roughly 20+ eager developers, and is sponsored by 5 powerhouse companies. The cherry on top of Developers Day is TWAIN Direct.

Long gone are the days of USB cables for image acquisitions! TWAIN Direct is TWG’s standard protocol platform that allows for secure image transfers from your devices without the hassle of cords or hardware. Being completely zero-footprint and mobile friendly, TWAIN Direct protects valuable user information while offering higher degrees of usability and optimization.

Participants are supplied with TWAIN Direct sample source code and a cloud-hosted TWAIN Direct RESTful API sandbox powered by Lyrid, all for free.

Alongside the free solutions and infrastructure is the ability to create with other developers in the space. Developers Day encourages collaboration by creating a community where developers can create their own solutions and look to other developed integrations at the same time, building something that hasn’t been seen before! Because of the nicheness of the TWAIN Direct technology, TWAIN Direct professionals will collaborate with attendees during the event, offering free hands-on support to any participant whether in-person or virtually.

According to Neal, developers walk into the event without a fully fleshed out solution, but leave with a functional document scanning application using TWAIN Direct and integrations from other participants. The purpose of the event is to give developers the chance to use TWAIN Direct technology and have the in-person support and interactivity that’s, otherwise, hard to find.

No selling, just creating a space where people can create.

Neal hopes that Developers Day can extend past its origins in Florida and become a yearly fixture hosted in locations across the country. To us, it may seem like the natural next step in expanding something great, but for Neal and everyone at TWG, Developers Day is a means of fostering the culture of innovation across the U.S. by providing cutting-edge technology, professional on-site technical support, and a space for next generation developers- all for free.

One of the most daunting challenges for TWG was coordinating event logistics, everything from finding the venue to ordering food was a first time experience for the organization. TWG also faced the possibility of participants being unable to attend in-person and opting for an online version instead, which the organization has accommodated for and ensured the same level of collaboration.

Creating diverse developer environments also proved to be an early challenge for TWG; with so many different programming languages being used and experience levels being varied, TWG has created a landscape capable of supporting language variations by recruiting TWAIN professionals for on-site support.

In addition to event logistics and tech support being main challenges, TWG also faced the hurdle of funding, here are some of the great sponsors that made this event possible:

Visioneer is one of the leaders in document capture solutions, you’ve probably used one of their Xerox-licensed document scanners before! Their mission is to “unlock the valuable information trapped in paper”, providing hardware products and support and training to do so.

Verve Corporation is a document capture software company with their product, Verve Capture, providing a clear path to efficient information capture. With Verve Capture hosting a variety of features such as document classification, recognition, and no-code design, Verve Corporation is able to provide a means for users to achieve their goals in the simplest and most efficient way.

Keypoint Intelligence partners with clients in the digital imaging industry and provides market insights that allows for anyone to adapt to changing market conditions. The analyst firm combines product testing labs, consulting, and custom content to provide their clients with the competitive edge they need.

The Workflow Magazine is a resource for all things business automation and content management. The publication finds the hottest news in all things workflow and tech, making sure that you can optimize both!

Promoting the Evolution of Developers to Innovators

Innovation is at the core of Developers Day, it drives everything about the event, from the people to the tech, but how is this innovation sparked?

The TWAIN Working Group has 30 years of innovation experience; the organization has been engrossed in streamlining the digital transformation agenda by:

And that’s just the tip of the iceberg.

Developers Day came about from focus groups conducted by TWG. The organization asked, “What could TWAIN do that would be beneficial to you?” The response? More opportunities to use the TWAIN specification. Instead of just granting their wishes, TWG went a step further by creating Developers Day, giving participants the opportunity to not only use the TWAIN Direct RESTful API and source code, but also be in the presence of on-site support and likeminded developers alike.

TWG is fostering the culture of innovation one event at a time, providing access to people and resources that are normally not available. With Lyrid, developers participating in Developers Day will be able to have a sandbox that supports their efforts and solutions.